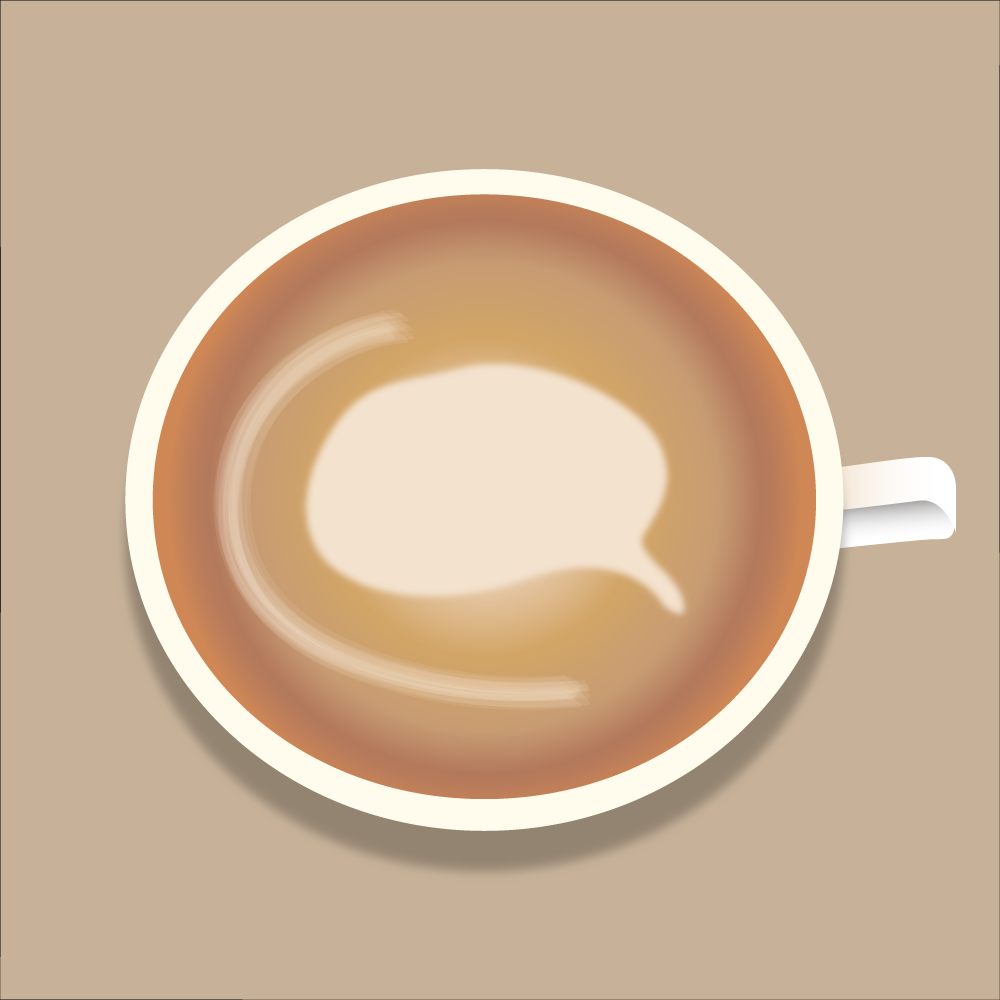 Coffee was traded out of the port called Mocha (yes, like the drink) in Yemen. The beans were ground down, put into sacks and stuck in the hold of a ship and stored with whatever else was in the ship, so by the time it reached Europe it was stale with a hint of sheep. Apparently, we loved it, couldn’t get enough of the stuff.

The first advertising for coffee would be word of mouth, spread by merchants around Europe as they travelled from port to port and brought their tipple of choice with them.

First coffee house was not Starbucks

London’s first coffee house was opened in 1652 by a servant of a Levant Merchant, Daniel Edwards. Servant was called Pasqua Rosee who was a Greek Christian that was trained to make coffee.

The story goes that Daniel Edwards used to entertain his fellow merchants at his house every morning, making them coffee but got sick of a whole bunch of people traipsing through his house, dirty boots and all, so set up his servant in a shed outside, right by the Royal Exchange. Read all about it here.

The business took off and Pasqua Rosee was soon serving 600 dishes a day (maybe cups hadn’t been invented yet, who knows.) Anyway, he found a business partner to help him, a grocer named Christopher Bowen. That was in 1654.

Christopher Bowen knew the power of copywriting to spread his brand message and penned the first coffee flyer. Nothing to do with half price muffins. The handbill ran with the headline, The Virtue of the Coffee Drink(sic). 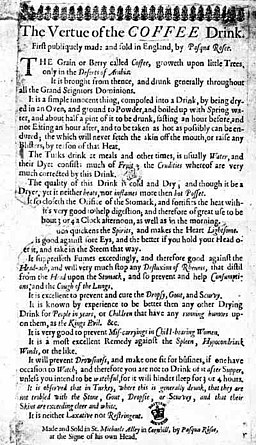 The copy then goes on to extol its virtues; good for digestion, the eyes, dropsy, scurvy and gout. Obviously, no advertising watchdogs in those days. But is worked, coffee became extremely popular and Rosee’s was around until it burned down in the Great Fire of London in 1666.

Coffee houses sprang up everywhere. The Puritans were in power in England were not that keen on alcohol, dancing etc. so coffee was the go to drink. There were still taverns and pubs but women were allowed in them but not in coffee houses. If you wanted to hang out with the boys, you went to a coffee house.

Each coffee house had its own clientele, lawyers, printers, merchants. They became meeting houses and centres of information and gossip. Each coffee house provided reading matter, so newsletters became a thing (still works today.) Poems, politics, science – interesting content for their clients kept them coming back.

A coffee house always had a long table in the middle of the room, everyone just sat together wherever there was a free seat. You might have to sit next to a stranger and chat, the reading material kept things interesting. They became so popular, Charles II tried to close them down in 1676. People were getting ideas way above their station.

Coffee consumption spread around the world as well as the production of coffee. Brazil became the biggest producer of coffee, supplying the huge demand of coffee in the USA.

Coffee consumption was given a massive boost after the American Civil War. Coffee is a stimulant; it keeps you alert and Confederate soldiers were given a ration of coffee that could make 10 cups a day. Ten free cups of coffee a day for a couple of years is hard to give up. After the war, demand spread west with the people.

The north had to put up with a coffee concentrate, a mixture of coffee, milk and sugar called Essence of Coffee, the first instant coffee. The troops hated it.

In 1873 the first branded coffee, Ariosa by Arbuckles appeared in Philly. They invented a roasting process and protected the roasted beans by coating them in a sugar and egg glaze. 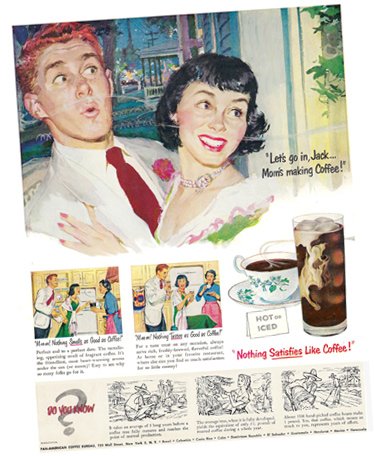 The copy for the Ariosa advertisement is great, very modern. “Costs more and is worth more than other brands of coffee.” They then back that up with four benefits.

By 1913, eighty-five percent of consumption is branded coffee.

Red Diamond Coffee was established in 1906, they later went on to use The Muppets to promote their coffee. Zany, the ads stepped away from conventional coffee commercials of the time that gave rational reasons to drink the brand. Instead, the message was, drink our coffee or else.

Their thinking was, “we have 10 seconds, how can we stand out?” This way of thinking becomes much more common later on but not in the 50’s and 60’s.

The invention of the coffee break

You have to thank a copywriter for your morning coffee break. In the mid-1950’s, Pan American Coffee Bureau put $2million behind an ad campaign that made the term ‘Coffee Break” a household term.

Aimed squarely at middle-class it wanted to make Pan American Coffee Bureau part of everyone’s daily routine. Ads ran across all mediums with the line, “Give Yourself a Coffee Break–And Get What Coffee Gives to You.”

It worked its socks off. By the end of 1952, in a poll, 80% of companies had introduced an ‘official’ coffee break for their employees.

In the 1950’s the tone for a lot of advertising was convenience, everything made life a bit easier for the busy housewife. All those horrible stereotypes that will make you cringe had their heyday then. Coffee was no different but took different paths in the USA and the UK.

Mass production of freeze dried instant coffee came about just after the second world war, an invention to help the war effort. To make a cup of coffee, all you had to do was boil a kettle, “Great coffee, in an instant.”

That message clicked in the UK. Even today, instant coffee accounts for over 75% of coffee bought to drink. In the US it is 10% and in France and Italy, less than 1%.

In the US, Mr. Coffee and Joe DiMaggio took the convenience throne in 1972 until that was taken away by Nespresso.

France and Italy were never bitten by the convenience bug. They went to the café instead.

In fact, from 1911, authorities in Italy enforced a maximum price for coffee for customers who stood at the counter. Sit down and all bets are off. Guaranteed cheap coffee was the sole reason Starbucks didn’t have any branches there until 2018.

Coffee has become a lifestyle. Starbucks doesn’t have a tagline, it has a mission statement, “To inspire and nurture the human spirit – one person, one cup, and one neighborhood at a time.”

Starbucks and all the coffee chains that followed their example have been extremely successful. I read that Starbuck’s sales account for 57% of the café market. Coffee has come full circle from the Coffee Houses that sprang up in 17th century Constantinople, reaching across the world.

Coffee was too difficult to make at home until the 20th Century and then science and ingenuity made it an easy task.

Advertising drove the popularity of coffee, first as a medicine then as a pick me up. The benefit went from great taste to easy to make. Now we have come full circle back to the social drink.

Crucial skills you need to be a copywriter.