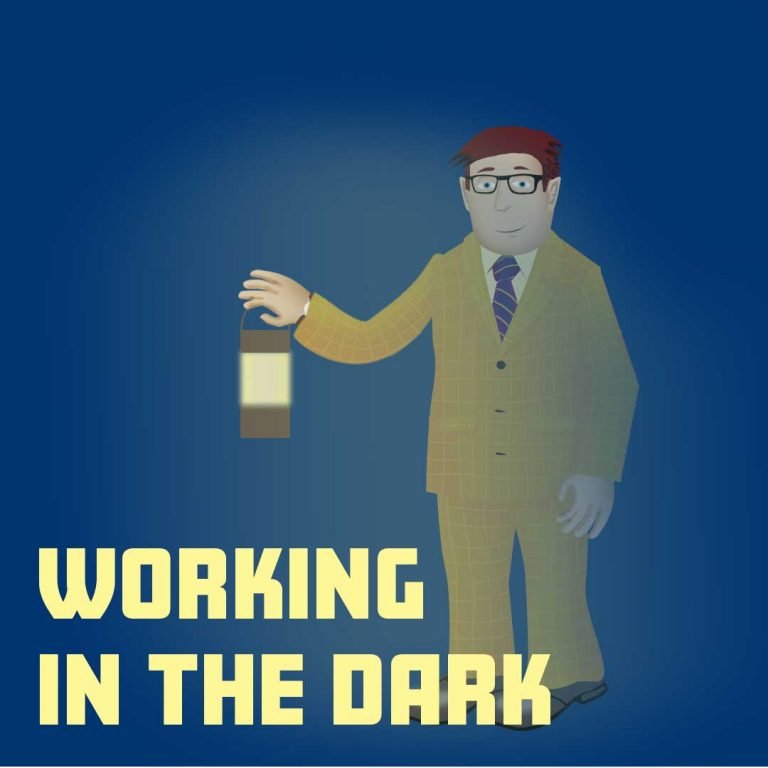 As a freelance copywriter – you want to nail the project for your client. If you have a bad brief you have very little chance of doing that, so what to do?

I thought I’d share a real copywriting example. I was recently asked by a design agency to produce copy for in-store point-of-sale material for a client of theirs.

Working in the dark

Their brief to me was an email that had very little information, no formal brief.

I had not worked with this design agency before, so I wanted to make a good impression, you want to get off on the right food, give them something that would build their client’s business. But to do that I would need the right information. I would not get to meet their client in person, so I had to work with the information they supplied.

So, I had two choices, I could either tell them their brief was inadequate but it didn’t think I would get much more information or I could show them with a progression of ideas that show different approaches to the POS work.

This is not how I like to work. I think it is much better to establish a plan and good creative brief to start with.

The benefit of a good brief

With a good brief you know more about your target and you have strategic direction that you all agree on up front. You set expectations – you know what you need to deliver and the client knows what they will be presented with. Everything you write should answer the brief, it then just becomes a matter of nuance between your ideas.

The information I received

The project was for a pharmaceutical company that produced capsules that protect sheep from internal parasites.

The email I received covered notes from a client meeting and a PDF that showed the branding and which parasites the capsules worked on.

I was told the objective was to show support to the wool industry as they were going through a tough time. Their idea of support was to produce a wool blanket locally and offer that to farmers who bought 2500 capsules.

I was asked to write a promo headline and supporting message that would be used across multiple channels (not specified.) After further enquiry I found out it would be point of sale materials and maybe a digital banner.

I did know whether this meant a poster or a leaflet or what kind of digital media they wanted to run. This is important because it tells me how much room I have for the copy – how much of the story I can tell. This also makes it difficult to quote how much time I need to write the piece.

The key message was to show support for local farmers and get them excited. I was initially asked to quote for copy that would appear on the packaging of the prize that explained how the blanket was created but that idea was dropped.

What I knew about the brand

I also know that sheep farmers have struggled because the demand for wool has dropped. The preference for wooden floors over carpet, innovations in textiles have meant people are buying fewer woollen products.

I knew not every farmer that bought capsules would get a blanket as only 300 would be produced.

After searching the client’s website, I found out that each pack contained 500 capsules. One capsule would protect one sheep for 100 days.

There were a couple of immediate issues. Point of sale has very little room for copy. It has to communicate with foot traffic moving around a store, so it will be restricted to a short headline and a few lines of copy. There is no room for a long background story or much information about the product.

The prize packaging could serve that role but that had been canned.

We were asking farmers to buy something to get the chance to win something – that is a classic promotion. Farmers had to spend money to get the chance (not guaranteed) of winning a grey woollen blanket. I was not convinced farmers would view that as “support”.

It was great that the prize was made from wool but not very exciting – like offering a meat pack to an audience of butchers.

The good thing was that there were 300 prizes, so a high likelihood of winning. A woollen blanket is valuable and relevant, whether the sheep farmer was rearing their sheep for meat production or wool.

But would it be viewed as support? You are asking them to spend money after all. So, if I have a message that says, “We’re supporting farmers by running a promotion, giving you the opportunity to win a woollen blanket.” Is that believable?

The problems stem from a vague description of what is required and a business goal that is not supported by the intended communication. A creative brief provides clarity, it also gives strategic direction without supporting information that confirms this is the right decision.

Without a good brief it is all guesswork. Finding the right answer then takes much longer.

When I was asked to quote on the job, I said I would need two hours for a simple point of sale piece and four hours to write a story for the packaging – where it was sourced, how it was made etc.

The packaging was axed, so I had two hours to do the job.

Trying to put too much information into a headline makes it vague. If the farmer could work it out in two seconds, he is not going to read more, he is just going to go about his day.

The client wanted to:-

I would have to choose what to lead with and what information I could use as support.

I thought that the most important thing was to sell product. The reward for buying multiple packs was the woollen blanket, so that seemed to be the best thing to lead with. The support message comes in as a substantiation and is the take out from the communication.

To explain my thought process, I wrote several different headlines and pieces of copy.

In this copywriting example, I started with straight promotional headlines that would get message across fast.

“Win” is an immediate flag to the reader that it is a promotion. “100% pure New Zealand” is language used to advertise New Zealand as a travel destination, words every Kiwi knows, showing national pride for where the wool is from. The headline is short and to the point.

The copy describes a product benefit and then outlines how to win the blanket in as few words as possible, celebrating the New Zealand heritage of the prize.

Next, I wanted to show how the ad would look if I led with a support message.

Be in to win 1 of 300 New Zealand wool blankets

We’ve got you covered.

In these two examples you can see I had to add a subhead which made the message twice as long. The onus of the wording highlights the support of New Zealand farmers followed by a promotional message. The copy then outlines how the farmer can win the prize. The excitement is generated by the prize itself and the quantity.

Next, I wanted to focus on generating excitement, making the promotion feel fun.

Wouldn’t that be wonderful? Be in to win 1 of 300 pure NZ wool blankets when you purchase 2500 <brand> capsules.

The best promo BAH none.

Shocking puns I know. But short and snappy and maybe they’ll earn a smile and a reason to read on, especially if the headline is accompanied by a picture of a sheep.  A farm retailer is quite a dull environment, a bit of fun is always welcome.

The image is also important to how the headline is read. You’ve got to have a picture of the prize but a folded grey blanket is a bit ZZZZZZZZZZZZ. A picture of a sheep with a cute headline is a different matter.

For the next step I went to Getty Images to find an interesting pictures of New Zealand sheep. (Did I mention I was not given a budget). I did some Google research on New Zealand sheep breeds and then downloaded some comp images and mocked-up some layouts. I have no skill in that area but I think it is important to give headlines and copy context.

Why did it happen?

Okay this is what I think happened. Every design agency I have ever worked with has supplied a very good creative brief – in some cases, better than an advertising agency.

The agency I was working with did not have much experience or interest in point of sale materials. I believe they got very excited at the prospect of designing the packaging for the woollen blanket, with the story that would enfold around its manufacture. That is what they excel at.

Their conversation would have centred around the packaging and the information I was supplied was leading up to producing that piece. The support materials to create demand for the prize were not the focus and as a result, not well thought through.

Always ask for a brief, I think it is in everybody’s interest. The client will get better work, in a shorter timeframe and the copywriter will be in a better position to deliver the work your business needs for the medium it is intended.

A copywriter, especially a freelance copywriter always wants to do a fantastic job. The more you work with a client, the better you understand their business and brand tone. But whatever it is you write, you want it to work. Without the right information your hands are tied – never easy to write in that position.

How to write email copy

How to name a brand – techniques used by copywriters.